Was it worth all that hype? 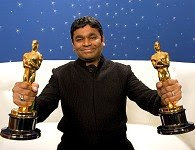 first off,
HURRAY!!!!!!!!!!!!!!!!!!!
Frankly,
I'm in high spirits since ARR won the Oscar and I'm a long time self-confessed ARRahmaniac. Plus the Oscar for Resul Pookutty was the icing on the cake. As he's just as much a Malayali as me.

But was Slumdog worth all that hype and Oscars?
I didn't think so. Not because they showed a poor India, but the story is just another typical bollywood trash. All that lost-and-found-and-lost again love story, rags-to-riches element... and there were glaring flaws too. i can't believe a quiz master could be so rude to a chai-walla on a TV show. That's sort of impossible.
like Vinaya said, "Bollywood story made by Hollywood".
Well put!

And music?
ARR has made music million times better than this soundtrack for sure.
Why didn't Rang De basanti get the oscars?story-wise, music-wise, directionwise and in every other sense that was such a perfect movie.
It deserved the golden statuette but doesn't get it 'cos it was not made by a Western guy?
But I gotta say that technically it was fantastic, even though there wasn't much logic in the whole movie, the cinematography was perfect.
Best Motion Picture Award?
Please.....
But like my friends said, the movie is not to be blamed, it's the jury that needs a spanking.

BUT FOR THE TIME BEING, I'M GONNA FORGET ALL THAT.
WHO CARES WHEN WE HAVE GOTTEN HOME THREE OSCARS!!
3 CHEERS FOR ARR AND RESUL POOKUTTY!

i had a hell lot more to say but i'm darned busy with exam preparations. catcha later!
and has anyone heard from Nishi? she seems to have disappeared- just.like.that.
Blogg'd by Azra Raphael at 10:56 AM

Email ThisBlogThis!Share to TwitterShare to FacebookShare to Pinterest
Pieced as movies, music, musings

Even i think slumdog isn't The Best Movie that India has made.... but its d only 1 which got d oscars... strange!!!
N ya ARR has made much better n hummable music in d past.. bt since d movies dint get nominated for oscars, so he dint win either.. watta useless logic!!
anyways i am happy that he has finally won n others hav been appreciated as well... congrats to Saira as well (his wife) for being INDIAN (unlike Ash n Mallika) in oscars...

but i have to admit that SDM is technically perfect. but then, every oscar nominated hollywood film can lay claim on that point!

his wife was there?
ain't she nice looking?

Finally! Someone who agrees that the movie didn't deserve all it got!

bt for me.. the two oscars he receives is for all his compositions put together!

thats what my friend said too. just consider the oscars as the acknowledging of all the work he has done till now