Paper Planes in the time of Intonation

This is a li'l post about ''Pen Planes''[not to be confused with the "Paper Planes" track from the SDM soundtrack, which, btw, was a really nice piece] that got transfigured into Fighter Planes when things got unbearably monotonous and dragging in the class. 5 straight hours of accent classes. Come on now! Human mind cannot concentrate for more than 45 minutes at a length, how are we poor souls supposed to keep our minds on intonation, rhythm, stress, supra segmental features and all that jazz for FIVE STRAIGHT HOURS???

Namitha and Vrinda had opted to stay away from class all morning, while me [usually superbly lazy to get my ass off the Main Entrance stone benches and walk up for classes] donned on the "studious" attitude for a change and stepped into class, along with the always-in-class darlings Vinaya, Ragitha and Prajisha.

One hour went along with Vinaya sneakily taking pictures of the class without the sir knowing. And by the third hour our back bench was behaving like a bunch of elementary brats.
Y'know that noise kids make while driving an imaginary car? With the lips they go all
BRRRRR-RR-RRR!
Well, apart from me the other 3 could make the noise puhfectly well. I couldn't admit that I wasn't good at stuff, could I?
So, here I was saying, yeah, you people drive cars and all, but I'm used to flying planes, which is why I made the noise "BWWWWW-WW-WWW!!!" 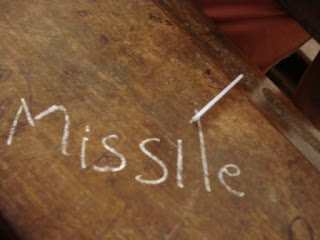 that's my missile (Vinaya argued logically that a refill was a missile, it couldn't be a fighter plane)
Lieutenant Raphael's missile has been hijacked by Flight Commander Vinaya. Captain Prajisha has provided Lt. Raphael with a passenger plane to take revenge on Ft Comm Vinaya. The fighter plane pilot Raphael is using the passenger plane at supersonic speed to bombard Ft Commando Ragitha's unsuspecting jet. I had forgotten that my original motive was to attack Vinaya's pen, oooops- fighter plane! All the while Flight Commander Vinaya is texting to Trainee pilot Namitha not to enter war zone III year Functional English. Namitha probably had second thoughts and wanted to attend class. but me and Vinaya felt that it was better to stay away from this mundane and advised her so thru text messages. span class="blsp-spelling-error" id="SPELLING_ERROR_28">M>Trainee pilot Vrindha is accompanying her.
Content of the message; "Terrorist English attacking us. Do not approach".

But Trainee Pilot Namitha seems eager to approach despite warnings.
The war seems near an end, but the enemy was holding us hostage. Ft Lt Raphael grew impatient and, as Ft Commander Vinaya reports,
"there is lack of ammunition and the enemy is holding us prisoners."
We pleaded and begged with sir to let us go with all sorts of reasons and excuses, but our teacher is way
smarter than us, sigh!

After an hour more of weary fighting, the soldiers got a brief respite. After consuming their rations [read, food] the attack resumes. After an initial "rat-a-tat-a-tat!!" soldiers settled into routine fighting. The trainee pilots who hadn't been at the war zone all morning, along with a relative newcomer Faheem have also entered the fight. Though our army is stronger in number, the enemy has the final authority. Which makes a potential rebellion near at hand. 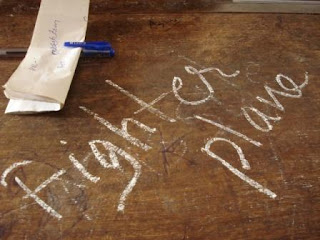 ohh god when do u ppl study in btw these things.. bt nonetheless its quite funny n amusing.. even in MBA clasez we do that.. not paper planes bt B-plans(business plans) of scams, affairs, etc. kuch bhi karte rehte hai other than studying...

5 hours of straight class! I can't imagine such things happen in the world.Do u get intervals?

Hmm btw u inspired me for a special post on "My experiment with paper planes". Will mention you! :)

that made me smile :)

Wow. that was so much fun to read. :)
I wish I could do that, I bet its more fun than sleeping with your eyes open.

@ blue- hey..things can be sooo interesting once u decide to open your eyes blue... but the classes have to be fun too!

that sounded like so much fun!! we play football on paper :P