I'd been waiting for the release of "Alice in Wonderland" by Tim Burton ever since that first trailer last year. Many reasons for the anticipation:
Johnny Depp is hot in whatever avatar he takes on. How the hell was I to know I'd get a crazy, absurdly massive crush on Mad Hatter? of all characters in the whole story??!
I don't have to gush about Tim Burton's direction since it's a universally known fact that he is sui generis. And all the three movies of his that I've watched include Johnny Depp. Edward Scissorhands, Charlie and the Chocolate Factory and now Alice in Wonderland. Maybe I'm not the only one with infatuations…
Warning: Anyone who hasn't watched the movie, and thus detests spoilers ought to run now when there still is the opportunity. You stand warned: This post is spoiler-rich!
Synopsis: The movie deals with Alice post her trip to the what-she-calls "Wonderland". She's now all of 20 and about to be proposed by a lousy, spineless Lord. The girl has one, single recurring nightmare; she's falling down, and down and down a hole with no end…and the rest-as-you-know.
So was that trip to Wonderland just a dream? [or nightmare, if you please] Or reality? What if Alice returned to that place after a long time? As in, now?
General Gushing: The movie is story-telling at its best. Just anyone can re-tell a well known fairy-tale. But it takes a really good imagination to unravel the story's fabric and sew it in a new manner, starting from the basics. Lovely. If this movie were a human, I'd have proposed marriage to it by now. Of course, kidding. But just so that I can tell you how much I loved the movie in its entirety. The direction, script, cinematography, lighting, animation, casting…the Everythingness of it! Or should I say, the muchness! 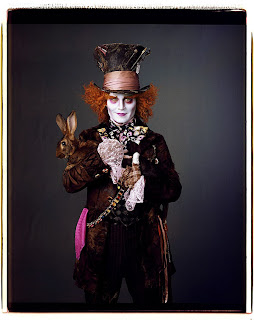 Things I loved:
For now, fairfarren y'all. Love ye! 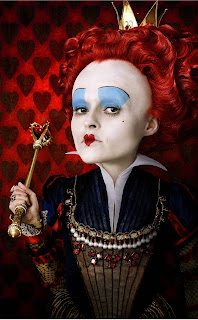 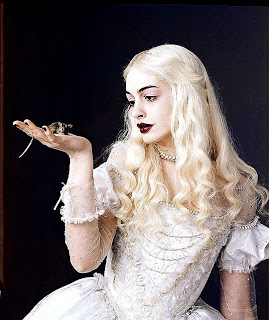 I totally plan to catch this movie so I did not go through the review but I had to mention that I love Mr.Depp.
From the sexy pirate look to the subtle innocent Edward and even the charmer in Chocolat !