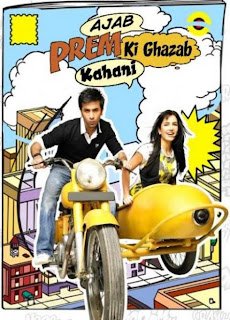 @ Bobby- buddy, I don't know if you will enjoy this movie here, but I'm working on a list of must-watch Indian movies. So watch this space!
First off, this movie is meant only for those who have a wholesome appetite for absurd comedy.

Moving on to more serious stuff; this movie is just so Ridiculously Cute!!
The cast itself is enough reason to watch the movie. Serious eye-candy. Everyone's [me included] sweetheart Katrina Kaif in a fitting role as an Anglo-Indian. Which means, you get to hear her great English instead of dubbed Hindi. And Ranbir Kapoor [squeeeeeeaaaaaaaal!!!!!!!] as Prem. I loved the actor who plays his father.

Honestly, the movie in itself is no good. Cliche story, mischief-maker boy, pretty-as-a-princess/ damsel-in-distress girl and all that. But what saves it is in part the cute cast, the fun elements and a crazy script. There are way too many loop-holes in the story than you had allow. The boy falls in love way too quickly. Mood of the movie shifts every now and then. But who the hell cares? Let's get jumping into the main plot!

A strange coincidence is how both Jenny and Prem stammer when they get upset.
Well, another coincidence would have been how both are vegetarians as well. If only his friends hadn't coaxed him into becoming a non-vegetarian to have something in common with her. How was he to know that she was a pure veg!

One big deal I noticed was that Jenny is a librarian! w00t!! Erm.. in case no one can understand why this is a big deal-- well, I'm studying for Master in Library and Information Science. Well! I think librarianship may just have got a brand ambassador! :P

I like the frankness with which he tells her that he sneaked into her room the previous night to place the thank-you bouquet, and that's how he came to realise she;s an orphan. Usually Bolly heroes tend to lie or at least leave such stuff un-said.

His heart is in bits, but plucky young Prem goes all-out to rescue Jenny from an unsavory-forced marriage with the weirdo Tony. This sequence involves a kidnapped train. What the...!!! No, no, I'm NOT complaining. I'm way too carried away with this movie to raise eye brows even if they planned to show Prem flying a-la-Mohabbat man.

The Underworld guys were cool. How come no other film director, or anyone for that matter, ever wondered how come the dons always seemed to have their phones perpetually recharged without actually doing that? That happens here. The Don is in a veryy awkward situation when he finds out his phone has run out of credit!! I'm clutching my tummy, shaking with laughter in pity for this predicament facing the don. May no filmy don have to face this situation. Amen. ;)

AND did anyone else feel the almost-"Mast" situation where he comes sneaky with Jenny as her beau Rahul disappeared at the last moment?

The final action scene is beyond words- [if u take me in the right sense!] Bubbles float around during the "tension packed" sequences where ransom is exchanged for Jenny. What could easily have become a worn-out emotional cliche scene becomes a fantastically corny-funny sequence:
Prem's dad comes out to fight the big-bad people.
Prem is surprised,
Dad responds with a melodramatic dialogue complete with sad violins playing in the background.
And Prem loves the line so much, he asks daddy to repeat it once more.
Dad complies with the exact same line, complete with the same melodrama and music!

And don't forget the Jesus-in-guise-of-theatre-actor-who-is-actually-Jesus-anyway. =)


PS- I know my review may be lacking, but I took sooo long to finish it, that the attempt became half hearted. :(
Blogg'd by Azra Raphael at 7:22 PM

Hmm looks like I missed many scenes since I fast forwarded through the movie in less than an hour.
Who knows, I might've fast fwdd them as well!!

I'm gonna watch it soon! Nice review! But I may not like it....ha, does that matter if you're promising such fun! ;)
btw, have you seen Avatar!??

This guy is really lucky !