Waving goodbyes, trying not to cry, trying to blot out misery

Omg.
I must have totally lost my mojo. How else do I explain spending over  2 months away from blogging, and still not regretting that?
I've been the laziest bum that ever was let astray on the face of earth and I've been watching; NAY; marathoning dramas, series and movies like the world's ending the very next day. well, it might. but that wasn't my point anyway.

So..
I'm done with my post-grad years. I'm still contemplating research, but not gonna go down that road for a couple o' years anyway.

Thinking back to these last 2 years still makes me feel awfully queasy. or specifically, that week. Uh, yeah i get it that i'm not exactly making sense- but it will when you read on.

All these years as a student- be it at elementary school, high school, college and beyond- i've been one of those goody-two-shoes kind of student. May not have come out first place during school- but I was always loved by teachers. Never exactly did anything wrong, and i was favorite student for quite a lot of my teachers. I'm not kidding when i say that even after all these years, some of them still talk about me with a smile on their face to their current students. ACCEPT IT! I WAS THAT NICE!

Why am I ranting on when it's obviously making lesser and lesser sense?

Hm, let's just say there's someone who feels that way. Ok, i'll just refer to him/her as Someone in this post for now. Someone is temperamental to begin with. Volatile emotions and highly oscillating mood-swings. So one moment Someone is being nice and talking well with me. Next thing I know, I'd called up Someone to confirm stuff about a job offer s/he made to me. Let's just say s/he was planning on making me and another classmate low paid guest lecturers. Like, real dirt cheap. Which was also probably why the call never went the way it should have.

I has said just one sentence to Someone, in English, to keep it polite and formal, unless s/he found me to being rude to their face. Yeah, one has to keep  literally a million things in mind before saying a word to this person. I swear. S blows up right in my face (ear) about how I'm being rude (cos allegedly i spoke throughout the call in English, being distant [WTH? are u kidding me?]), mean, disgusting and to just refuse the job offer if I weren't interested.

Truth is, I'm interested. And S is my teacher. But S didn't even bother answering whether S would be covering for my travel expenses even. Youch. #worstphonecallever
and since he blew out in a rage w/o answering on the pay, my family guesses they weren't gonna pay me much. probably lesser than less.
i cried.

So next time I went with classmates to collect certificates and get the hell outta that place, I knew i'd be facing the wrath of something I knew I didnt deserve. Boy, was I right.

Things said to me:

I kind of cried again right there. Yeah, call me out on being softie, but I can't handle allegations that maketh no sense. I know S can be angry and then go back to nice real quick. Not in my case. Not yet anyway. I also know S regularly abuses every subordinate and hurls fierce insults at them in public. Yeah, not exactly a well-loved person in there I'd say.

Good to have finally gotten out of there. There were great friends, good teachers, beautiful memories.. But why did the ending have to be so messy ? 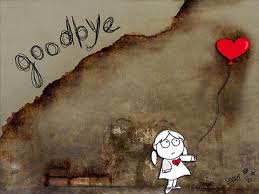 Anyway,
goodbye my pg years, and dept
adieu,
alvida,
annyeong,
and every other way to finally sever ties with that horrid memory.

Waving goodbyes,
I'll Trying to keep from crying
Closing a chapter of life,
Blotted by black memories and white.

{o my! that was so spontaneous! *must work on it}

PS- Gilsha, you're an amazing friend whom I never want to lose. Sorry for all the times I may have been mean to you. Forgive me =)

PPS- and no, i didn't take up that job offer. in case you were wondering. not worth the insults i'd've to face anyway.
Blogg'd by Azra Raphael at 10:49 AM

Email ThisBlogThis!Share to TwitterShare to FacebookShare to Pinterest
Pieced as bad day, comeback post, decision, relationships, scared, You as anonymous

Hey Raphel,
I think you're one amazing person, And I seriously don't give a damn to what others say and think about you anyway!
I understand saying good byes ain't no easy at all, but then again, it's meant to be that way!
Things will change for better, sweetheart! Smile :* :)

Hі! Would you mind if I ѕhare your blog ωith my facebook gгoup?
Therе's a lot of people that I think would really appreciate your content. Please let me know. Cheers

Feel free to surf to my web page: side effects of yaz