Adorkabl-est movie of the year

Seriously, from my opinions about the movies whose teasers I reviewed in this post, I think only this movie has been true. Everything else was heart-breakingly pretentious and cheated on me. Yes, I'm talking to you- backstabber I Hate Luv Storys and Aisha. I don't think I can ever trust you with a movie again Imran. But then again, maybe I took this long to reach that conclusion only cos I didn't dare watch your dreck movies Luck and Kidnap.
** 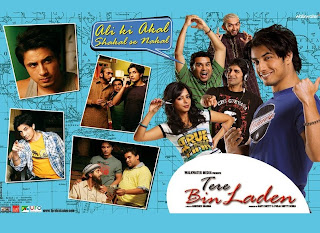 Anyways, presenting to you Tere Bin Ladan, starring good ol' Ali Zafar, Pak pop singer. Sigh… I've missed you, boy. I fell in love with him years back after watching his music videos "Channo" and "Sunre Sajaniya". He was adorkable back then and still adorkable now. And this movie makes full use of his dorky-ness.
Though it's barely one and half hour long, it's not too overloaded with plots. There's one plot, and the movie does perfect justice to it. Btw, I had to clutch my sides and stuff my fist in my mouth to stop from laughing too hard. It's a riot.
Once more for emphasis: It is a R-I-O-T.
And lordy, I missed you so, so, so very, very much Shaleen meri Kaleen!! Great comeback, girl! [rememb the tomboy from JTYJN? she's in here! And I did see her in the trailer itself! {and I gotta stop being hyper. Control Raphe, control.}]
Movie makes fun of many things in a happy, whimsy, mischievous, playful manner. Like, the American paranoia about terrorists, the Asian dream of making it big in America, the futility of the War on Terror, among other things. One lovely thing you'd notice upon watching the movie is that, even though it's about a Pakistani's story set in Pakistan- you can totally relate with it. Entirely. I especially love how everyone talks in Punjabi. After all, Pakistanis and Indians were all one and the same until that bloody Partition came down on us and dragged everything along with it. You don't really even remember that the movie's supposedly Pakistani, until the characters mention it. Long-lost siblings we both, like I said.
The tone is hilarious, soft political satire, great cast, and a fast moving, tightly packaged script. Everyone already knows the premise of the story, so I won't repeat it. Zafar [gah, even thinking about him makes me want to swoooooon] is the slick guy who's got the gift of the gab and can totally convince anyone to join his wacky plan. Sigh, I loved every single character. I have got this massive crush on the whole movie, the story, the script, the direction, the cast [Qureishi!! Zoya! Lateef! Majeed! Gul! Usman! Ali! And of course, the real star- Noora! And the superstar- Sikander!!]
Confused? Don't worry, you'll find out once you watch the movie.
And why oh why did they ban this gem?
I fell all over in love again with that catchy "He's a good looking Ulloo da Pattha". Kudos to everyone's favorite trio Shanker-Ehsaan-Loy for the music.
My rating? 12 on 10. A must-must-MUST watch for the weekend. Go buy the CD already!
Oh, and one last thing to do before I wrap up the post:
*gets down on one knee, and;
"Tere Bin Ladan, will you marry me??"
Blogg'd by Azra Raphael at 6:52 AM

I have to yet see this movie. But yea even my friends said it was nice, now I think I must see it.
btw I am waiting for your review on Robo...

:) wow that sure is a rave review!