Gandhiji has left the building 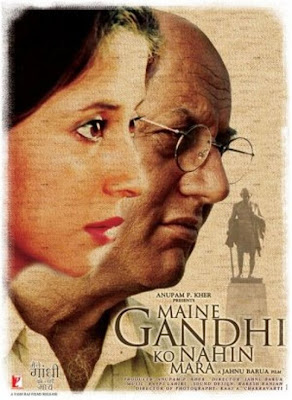 I had wanted to talk about yesterday actually;my birthday. That was my plan until I watched "Maine Gandhi Ko Nahi Maara" today. [pure coincidence, in fact I didn't notice that we were happening to watch a movie related with Gandhiji until it kinda struck me in the face]
{by the way, Vaikhari is reading Tushar Gandhi's "Let's kill Gandhi", though I don't know if that's a coincidental occurring like my watching Jahnu Barua's amazing movie today itself without even realizing it}

On the surface, and for a huge part of the movie, the focus is on how dementia affects people, no matter how intelligent and even brilliant they used to be. And how Anupam Kher [OMG, what a talented actor he is! actually, everyone from a theater background is a natural at acting. anyways...] keeps insisting he didn't kill Gandhi. This guilt of his that he killed Gandhi has its roots from a childhood incident that subconsciously still was on his mind,after all these years.

But honestly, this movie is about how each of us have a share in the daily murdering of Gandhi. Almost everything we do is yet another knife into his ideas, his visions, him.
Like Anupam Kher's character says,
" Did he fight for freedom to see this? This situation of our country where he is remembered only on two situations. The day he was born, and the day he died."


That's exactly why I am not too high on celebrating any sort of special day. Even Independence day has a ring of hypocrisy and phony-ness to it. Everyone is all smiles and waving flags one day, and go back to India-bashing the next. Gandhi wasn't celebrating on August 14th,1947. Nay, he was trying to find a solution to the murderous communal riots and the problem of hunger in his country. What a man. Such honesty, sincerity and courage in such a simple man, the Father of the nation.

Like Einstein said,
"Generations to come, it may be, will scarce believe that such one as this ever in flesh and blood walked upon this earth"

Here's to the endearing memory of Gandhi and to those who still follow his chosen path of life. May they increase in number. May we have the strength to be one of them.

I'm proud of what my country has come through,
ashamed of what it has come to.
[music coming to mind right now is- "Waiting on the world to change"-John Mayer. striking lyrics]
Blogg'd by Azra Raphael at 5:15 PM

Email ThisBlogThis!Share to TwitterShare to FacebookShare to Pinterest
Pieced as movies, musings

Now thats a serious post, without being preachy.
Honestly, people who feel for Gandhi today are rare. Infact, we treat all the national events as just extended holidays apart from the weekends. Yes, it all sounds hollow and hypocritical.. But can't really see a solution.

It is odd that I have never been a proponent of Gandhi not that I support British Raj either...
But then, I am proud of my country...and ashamed of its extremely illogical that crop up...

I dunno how, but I strongly believe that if we somehow can blur the divisions, there be some increase in the patriotism...


For my indifference towards Gandhi, get a copy of Nehru's Bunch of Old letters..

It's funny because most of us have gotten used to living in this society which propogates none of the beliefs Gandhiji stood for you know...
I like teh last quote... sums it all up.

And at the risk of sounding horiibly late, happy belated birthday !

@ mohua-cant see a situation.. isnt that just an excuse?we could make a tiny,still real change. a change in our attitude. like, starting with stopping making fun of the country,no matter how horrid the situation.[i knw, i cant stand many things that happened, but still-we shud try making patriotism unconditional]

@ bobby-will check that book. thank you! i love book recommendations!